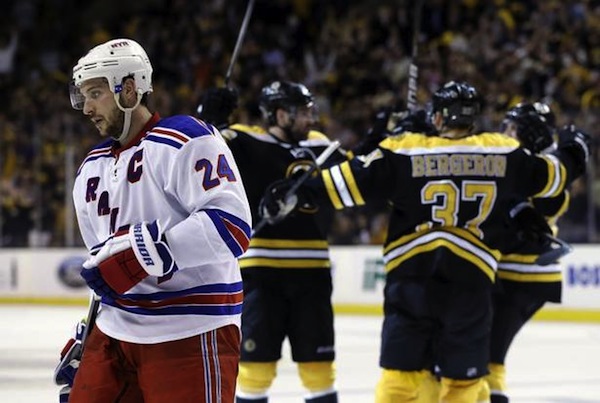 They won Game 4, but the Rangers still don’t have much to smile about.

Tonight the New York Rangers hung on by the skin of their teeth to avoid being swept by the Boston Bruins in Game 4 of Eastern Conference Semifinals, winning 4-3 in overtime.

The game was dramatic, hard-fought, and about as even as it gets. Each team had four power play opportunities and three goals in regulation. And what the Rangers lacked in shots on goal, they more than made up for with hits.

The series itself has been much like the Rangers previous series against the Washington Capitals, with all but one game decided by a single goal. New York even went down 0-2 against Washington before rebounding to win in seven.

They were certainly a long shot against the Caps. Teams that’ve come up empty in the first two games of an NHL playoff series have less than a 13 percent chance to comeback and win. The Rangers became the 38th team to do so in 292 tries.

Unfortunately, for as much fight as these overachieving Rangers seem to have in them, they’re facing the bleakest of odds to advance to the Eastern Conference Finals. Going down 0-3 in a playoff series and coming back to win has proved an all but impossible task.

So you’re telling me there’s a chance!

Well, yes. But not a good chance, obviously.

History say the Rangers have a 1.7 percent chance to comeback and defeat the Bruins. There have been just three teams in NHL history to comeback and win a series after trailing 3-0.

The first team to do it was the Toronto Maple Leafs way back in 1942. They actually trailed the Red Wings 3-0 in the Stanley Cup Finals and somehow managed to turn that sinking ship around and win the championship.

The second team was the 1975 New York Islanders during their dominating dynasty years of the late 70s/early 80s. They trailed the Pittsburgh Penguins 3-0 in the quarterfinals before sinking the Pens to advance.

Now if there’s a silver lining for Rangers fans, it’s that the third team to choke after going up 3-0 was the Bruins—and it wasn’t all that long ago! In 2010 the Philadelphia Flyers came back to win the Eastern Conference Final after dropping the first three to the Boston.

And now that the Rangers are only down 3-1, theoretically, they have an 8.7 percent chance of winning. It’s theoretical in that it takes some liberties with how odds are applied.

Whatever though, math has always been too ridged for my liking anyway.

Some people say the Rangers will never win this series against the Bruins. I say, never say never. But those people probably right.