Houston Astros: The Best At Being Terrible

The Houston Astros are taking baseball lows to new heights in 2013. In recent months the club has been described as “historically” bad and many in the sports media are wondering if these guys have what it takes to keep up their epic losing pace.

Sucking over a few months is one thing, but maintaining it throughout an entire season isn’t as easy as it sounds. There are 162 games in the MLB regular season and, no matter how bad a team is, it’s a rare occasion that they can’t stumble into at least 50 wins.

In fact, dating back to 1989, only 24 clubs have managed to finish the season with a winning record at or worse than .300. The good news is that the Astros already have 15 wins, which means they are only five away from securing a place as not the worst team in the history of the league.

Not a distinction typically strived for, but chasing history is always fun!

The even better news for Houston is that it’s their terribleness everyone is talking about. The Miami Marlins are riding the waves of a six game losing streak right now and have just 13 wins on the season—nobody cares. Not even Marlins’ fans, of which there are dozens. On a good night.

Miami’s controversial salary dump got some press in the offseason, but only because they play in a brand new stadium which was built using $2.4 billion worth of taxpayer dollars, without ever putting it to a public vote. Now they are hated to the point of being completely ignored and the press they do get is either contemptuous or dripping with sarcasm.

The Astros have been treated more favorably by the media, perhaps because they have earned a bit more goodwill? They are just seven seasons removed from appearing in the first World Series in franchise history back in 2005. Seven years and an ownership change later, they are now in rebuilding mode.

Stinking today for the promise of a better tomorrow! A promise that has been known to be hollow.

Although if anyone knows how hollow that promise can be, it’s Pittsburgh Post-Gazette’s sports writer Bob Smizik. He’s been on the Pittsburgh Pirates beat since 1969 and recently published a brief piece in which he gleefully asked the question: How bad are the Astros?

The answer? Bad. Very bad. Definite contenders for a history making season of suck. That’s coming from a very old man who has seen a lot of very bad baseball. Smizik is old enough to have seen the Pirates in their glory days, but after 20 consecutive losing seasons, those memories are probably fading for him.

The most recent standards for achievement in being awful were set by the New York Mets in 1962, with just 40 wins, and the Detroit Tigers in 2003, with 43 wins. The general consensus seems to be that these Astros have what it takes to take a run at the crown…of losing.

And it’s all by design. Probably.

Team management has unburdened themselves, the team, and fans of any frustration that comes from event attempting to field a competitive team. The Astros payroll was slashed to just over $26 million in 2013, the lowest since the 2008 Marlins. And most of that is invested in just three players, the highest of which being Wandy Rodriguez, who plays for the Pirates.

Needless to say, a Major League inspired mid-season run at a pennant that is fueled on nothing but pure spite and hatred isn’t in the cards for Houston. They are the lowest paid and least talented team in baseball and their numbers are reflective of that. But going into the season knowing you’re going to either finish in last place or further in last place is liberating.

If the salary dump pays off and their countless prospects pan out, the Astros won’t be in the basement forever. So the only thing left to do in the meantime is sit back at the ballpark, enjoy the daytime drinking pass it affords you, and watch some truly terrible baseball being played.

Who wouldn’t rather watch a season historic failure than, yet another, of overpaid mediocrity.

The only way to truly rebuild is to be truly committed to being the worst—at least for awhile. That’s what the Astros have done. And they’ve done it brilliantly.

Promising to lose while still keeping hope alive for the future is not easy. This season Houston has the potential to be the best terrible team in the history of baseball. Two years from now they might be above .500.

Who knows what lies ahead, so let’s enjoy the Astros being amusingly abysmal while we can—because we all know there is nothing funny about the Marlins. 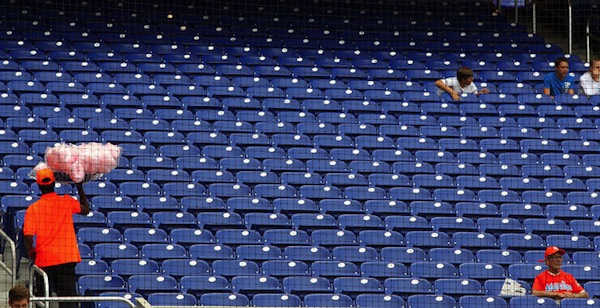