The NBA season tipped off this week on Tuesday night with rookies filling out rosters and many players playing for new teams. One team that is looking forward to a successful season is the Los Angeles Clippers. The Clippers until their appearance last season in the playoffs had not been to the postseason since 2005.

With their huge acquisition of All Star guard Chris Paul prior to last season, the team became a legitimate contender. They proved that last season by leading the NBA Western Conference’s Pacific division for much of the season before losing the title late to the Los Angeles Lakers.

The team this season is looking forward to winning the Pacific title and going deeper into the postseason than last season. If the Clippers qualify for the playoffs, it will be their first trip in two consecutive seasons since the 1991-1992 and the 1992-1993 seasons.

The Clippers with their talented lineup have a good chance of winning their division and even winning the Western Conference. The Lakers have great drawing power and a talented lineup, the Oklahoma City Thunder have scoring power but will have to fill the hole left by the departure of sixth man James Harden and the San Antonio Spurs have a plethora of talent but their legs are aging and time will tell if they can stand up through an 82 game regular season and four rounds in the postseason.

The Clippers now have the depth they have needed to compete and if they can stay healthy, unlike during the playoffs last season, then they might just find themselves representing the NBA’s Western Conference in the NBA Finals.

The Clippers started their season Wednesday night with an impressive win over the Memphis Grizzlies. Their top two players, the aforementioned Paul and their superstar power forward Blake Griffin were not even the team leaders in game one, which speaks to the depth on the team. DeAndre Jordan helped the team early, while Jamal Crawford’s game high 29 points showed why he might just be a candidate for the sixth man of the year, this season. 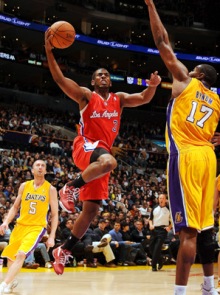 Newly acquired Lamar Odom, who started his career with the Clippers and Eric Bledsoe helped the Clippers on the boards and offensively. The Clippers started the fourth quarter of the game behind and were able to battle back to victory. With the addition of Ronny Turiaf and the likes of Ryan Hollins and Matt Barnes, the Clippers can boast that they have the potential to have two starting fives in the same lineup. For them that means a great deal as the season is so long and injuries take their toll.

What will help this season is that the players will not have to adjust to Paul. He came to the team late in the preseason last year and players needed time to learn his game.

This season the Clippers can also play under the radar even more. They share their home court with the Lakers and the Lakers are under more pressure than any other team to perform. The Lakers picked up Dwight Howard in the offseason and everyone will be focusing on them. The Lakers did not get off to a good start as they lost their first two games of the season.

The Clippers will also be getting Chauncey Billups back sometime this year after he completes his rehabilitation from knee surgery. The team acquired veteran Grant Hill to bring experience to their roster. He currently has a knee injury, but will be activated soon.