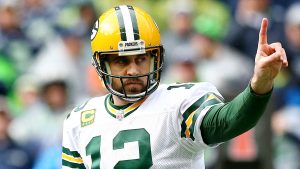 The Packers used their first-round pick, No. 26 overall, to select Utah State quarterback Jordan Love in the 2020 NFL Draft.

That, despite having Aaron Rodgers still performing like one of the top QBs in the league.

Stop me if you’ve heard this one before…

In 2005, the Packers used their first-round pick, No. 24 overall, to select Cal QB Aaron Rodgers.

That, despite having Brett Favre still performing line one of the top QBs in the league.

NBC Sports’ Peter King told WEEI Friday that Rodgers is not amused by the current situation.

“I’ll tell you what he thinks, he’s pissed off. Wouldn’t you be? You realize that when the Green Bay Packers have been sitting there for the last four drafts and Aaron Rodgers said, ‘Give me a weapon, give me a weapon. Get me some receivers’ and the Packers have never, unless you consider Ty Montgomery, who was switched to running back after being a college receiver at Stanford, they have not picked a wide receiver in the top 100 picks in the last four drafts when they have had a significant need in the last two years. Now, they have pick 62 tonight and they will pick a receiver, I would guess. But, I don’t know, if I am Aaron Rodgers and I am on record, he told me this, he said, ‘I will play until I am 40 as long as I still have my legs.’ Well, he looks to be in great shape. He always keeps himself in great shape in the offseason. That would mean he wants to play another four seasons, at least. If that is the case, he probably is going to play is last year, two or three somewhere else because it is clear now that Jordan Love is the quarterback of the future in Green Bay.”

When he first came into the league, Rodgers sat on the bench behind Favre for three seasons before Green Bay finally made a change at QB.

According to CBS, Rodgers signed a “four-year, $134 million extension in 2018 that’s supposed to keep him in Green Bay until 2023. … Due to the amount of dead cap space, it’s going to be nearly impossible to get rid of Rodgers before 2022.”

That means Love could sit on the bench behind Rodgers for at least three seasons before getting a shot as the Packers’ starting QB.