Bevo tries to murder Uga ahead of Sugar Bowl brawl 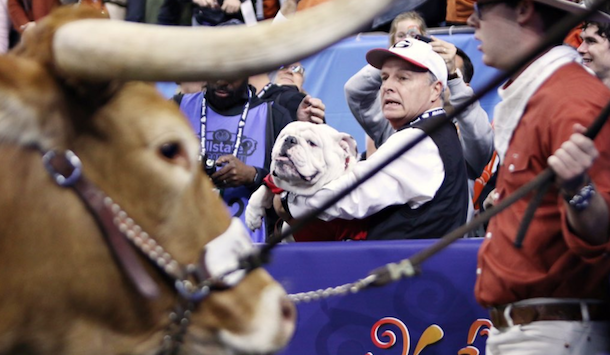 Ahead of Monday night’s Sugar Bowl matchup between Texas and Georgia, Longhorns mascot Bevo caused quite the stir and nearly gored Uga.

The scene unfolded on the field as Bevo was brought out for the mascot introduction with Uga, the Bulldog.

As Bevo approached Uga, the huge steer lowered his head, horns down, and scared the heck out of everyone in attendance.

Greetings from the Superdome, where things got a little tense when Bevo and UGA met before tonight’s #SugarBowl pic.twitter.com/xb7sfNy2dz

Thankfully it appears nobody was hurt, but it was certainly a very close call for a certain portly dawg.