Dak Prescott confident deal with Cowboys will get done 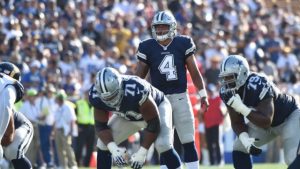 Contract discussions between the Dallas Cowboys and quarterback Dak Prescott is one of the biggest NFL storylines this offseason. The Cowboys are hoping to sign him to a contract extension soon and even Prescott feels confident that something will get done.

Cowboys vice president Stephen Jones recently hinted that contract talks were about to heat up, even after the star quarterback’s frustrations with the organization. Fortunately for Dallas, Prescott believes that he will be with the Cowboys in 2020 no matter how it shakes out.

The Cowboys have the option of applying the $27 million franchise tag on Prescott, which is a possibility if talks don’t progress far enough before free agency begins.

Prescott reportedly won’t be asking the Cowboys for $40 million per season, but he knows he deserves to be paid like a franchise quarterback.

Now it’s just a question of when the Cowboys will finally make it happen.