Joel Embiid will miss another week with shoulder injury 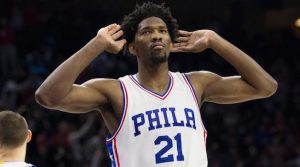 The Philadelphia 76ers will be without star center Joel Embiid for at least another week after he suffered a left shoulder sprain.

Shams Charania of The Athletic was the first to report:

Source: 76ers star Joel Embiid has left shoulder sprain and will be re-evaluated in one week.

Embiid suffered the injury Wednesday night against the Cleveland Cavaliers. He left the game early in the second quarter and did not return.

Without him in the lineup, Philly collapsed and ended up getting blown out by one of the league’s worst teams.