Maybe Cardale Jones Wants To Play School After All

After starting the season at Ohio State as the third string quarterback, redshirt sophomore Cardale Jones was the next man up after Braxton Miller and J.T. Barrett both went down with season-ending injuries. Miller missed the entire season, but the freshman Barrett played every game of the regular season before being carted off the field during the Big 10 championship in December.

Initially the situation for the Buckeyes seemed bleak—it was hard to imagine a team with three top notch talents at the quarterback position, especially when some teams struggle to find even one. Though at 6’5 and 205 pounds, he certainly has the size, but until he took the field against Wisconsin, Jones was probably most well known for an ill-advised tweet from 2012. 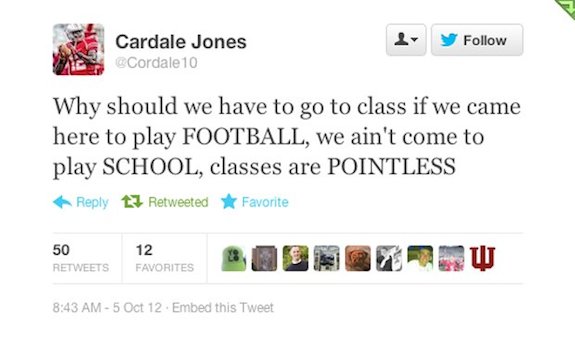 Jones can definitely play football. He’s the only player in college football history to win a ring in each of his first three starts—one for the Big 10 championship, one for beating Alabama in the Sugar Bowl, and another for besting Oregon in the first year of the playoff. With the possible exception of Zeke Elliott, Jones was bigger and badder than everyone on the field. He made those mighty Ducks look like a Pop Warner team.

Although he only has three games (and two starts) under his belt, many speculated Jones would declare for the NFL Draft. It made sense since he’s already at a pro level physically and may not even be the starter for Ohio State next this fall. Barrett put up exceptional numbers as a freshman and it’s hard to imagine Urban Meyer will punish him for getting injured after what he did this season. Jones doesn’t even have the option of transferring, unless he wants to sit out a year.

That’s why it came as such a surprise on Thursday when Jones announced he would not be declaring for the draft, opting instead to return to Ohio State. Jones said the decision was “simple,” noting that the timing just isn’t right and that he wants to be a college graduate first.

So it looks like the 22-year-old does want to play school, after all.