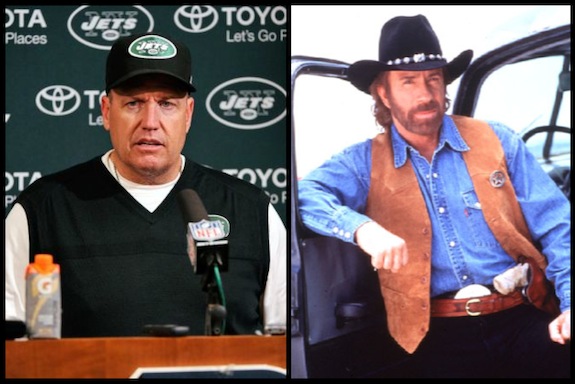 A sad story just gets sadder for everyone involved.

As if the last year hasn’t been grotesque enough for the maybe starting quarterback of the New York Jets Mark Sanchez and their former third stringer Tim Tebow. Frankly, it hasn’t been that swell for Jets coach Rex Ryan or even roundhouse kick to the face legend Chuck Norris.

Although that last one may be difficult to believe, given that Chuck Norris was not in The Expendables, because no one expends Chucks Norris—Chuck Norris expends you. And the Titanic? That thing wasn’t sunk by an iceberg—it hit Chuck Norris when he was out taking a casual swim.

So you may remember the 2012 Jets. They were what you may call…a terrible plague on football. That sounded harsh, obviously, but sugarcoating the truth in a dire situation rarely helps matters. Although that situation started trending downhill in 2011, so fans have had time to adjust.

After leading Gang Green to two consecutive AFC Championships his first two years as head coach, the Rex Ryan’s ragtag bunch of malconents regressed in a big way. The locker room became toxic and members of the team ran to the media anonymously to rat each other out at every opportunity.

As ugly as things got for the team as a whole, nobody got it worse from the fans, the media, and even the franchise, than QB Mark Sanchez. He’s been beaten, beleaguered, and been dodging a barrage of hate from all directions for the last two seasons. Not that he’s ever been particularly respected throughout his career. 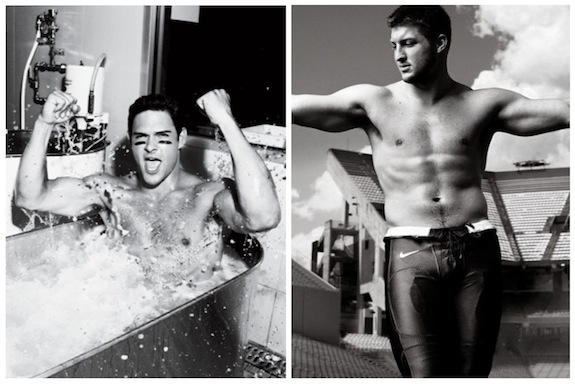 Apparently this competition isn’t entirely over yet.

Which could be why back in March 2012, someone within the organization, someone who has yet to claim credit/take blame for the move, decided it was an excellent idea to trade two draft picks—a fourth and sixth round—to the Denver Broncos in order to acquire Tim Tebow.

Yes, he was coming off one helluva an interesting season in Denver in which he led them to an unlikely playoff berth and even a win over the Pittsburgh Steelers. But the Broncos had a lot more help around Tebow in terms of a running game and a defense—his stats weren’t even close to an improvement over Sanchez.

In Tebow’s “Miracle” season with the Broncos in 2011, he played 14 games, threw for approximately 1,700 yards, and completed 46.5 percent of his passes. They only let him try to throw the ball 271 times in the regular season, he had six interceptions, seven fumbles, and his QB rating was 72.9. It was a miracle they made the playoffs when you see those numbers.

In Sanchez’s “Let’s get the pitchforks and torches ready” season in 2011, he started all 16 games, threw for approximately 3,500 yards, and completed 56.7 percent of his passes—a career high. He attempted 543 passes, had 18 interceptions, four fumbles, and his QB rating was 78.2. Also a miracle, considering the toxic environment and lack of talent he had around him. 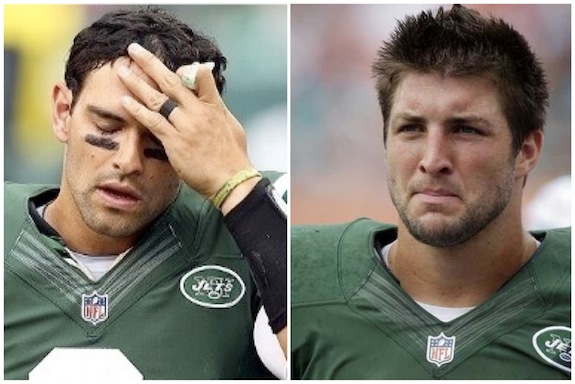 Who looks sadder in green?
Trick question! They both do.

Let’s just say that nothing improved for either of these guys in 2012 and it’s a trend that has continued through 2013 to this point. Coach Ryan was lucky to keep his job and he no longer feels it’s safe in the hands or on the arm of Sanchize.

They need to realize up in New York that Sanchez isn’t their only problem. But why set a broken bone and go through the proper rehab when you can just toss a bandaid on the injury and move one quickly?

Which is why the Jets selected Geno Smith, a QB out of WVU, in the second round of the NFL Draft. Ryan is going to need one of those boys to come up very big for him this season to even have a shot at keeping his job in 2014.

It’s rare that a team dumps their GM and keeps on the head coach. Although the Chicago Bears kept on coach Lovie Smith when they hired a new GM in 2012. Granted, Smith was fired at the end of the season after failing to make the playoffs. If Ryan has the same result in 2013, expect him to suffer the same fate.

The good news is that the Jets finally released Tebow in April, but if you thought sending the Gator great to the unemployment line was going to put an end to the constant jibber jabber surrounding him— think again. Or that drafting Smith would turn down the heat on Sanchez—nope.

The Tebow jibber jabber and the abhorrence of Sanchez will live on until they retire…die…or the Rapture rolls in. The former teammates were both in the news this week again, and both were likely quite familiar and not at all surprised with the type of coverage they received. 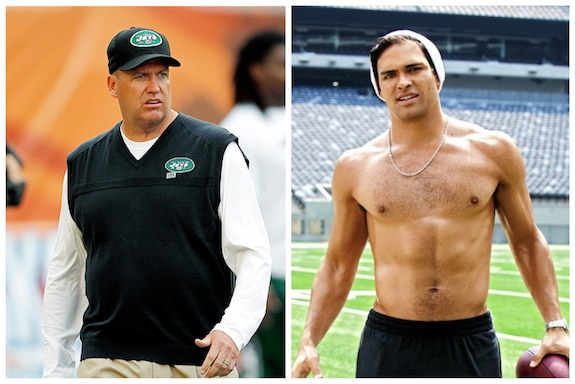 Is this bromance finally coming to an end?

The notoriously stubborn and combative Ryan hitched his wagon to the Sanchez train when he selected the former USC QB No. 5 overall in the 2009 NFL Draft. The very first draft pick of his head coaching career—he got pretty attached to the sexy Sanchez.

For over three years Ryan stood lockstep with Sanchez through every interception, sack, and butt fumble.

No matter what happened, it seemed that at the end of the day these two were going to be there for each other. Obviously they are more than just coach and quarterback—these guys are friends, bros even.

Well they damn well better be! Have you seen Ryan’s infamous tattoo? 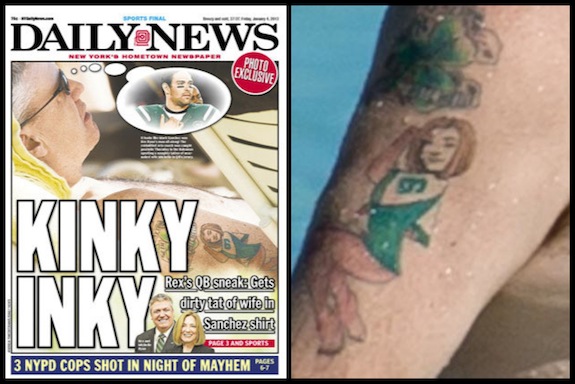 If you hadn’t, now you have! You’re welcome.

Any chance Mike Tomlin has a tattoo of his wife in a seductive pose rocking a Ben Roethlisberger jersey on his arm? No. There is no chance of that at all. That would be disgusting and they both know it.

Unfortunately for sad man Sanchez, his only friend in the world has ended the moratorium on calling him an unacceptably terrible piece of human football garbage. Okay, Ryan’s recent comments were’t quite that harsh, but it could be a sign of things to come.

During the Jets OTAs in late May, Sanchez was reportedly picked off three times during practice. Intercepted by his own crappy defense. No wonder Ryan called it “unacceptable” and overall “disappointing.”

We all know the Ryan brothers have got some mouths on them, so he was clearly holding back. Sanchez should be thankful Buddy Ryan isn’t hanging out at the Jets facility like Joe Namath used to. He’d probably just kill him.

The real question here? Why the hell is Mark Sanchez even at OTAs to begin with? They’re optional. If something is optional, one should always opt not to attend if everyone there hates you.

Can’t imagine wide receiver Santonio Holmes was really going out of his way to catch balls and make his nemesis look good. That team is going to do nothing but try to sabotage Sanchez at every opportunity.

He’d have been better off staying home and seeing if Geno Smith can bumble himself out of a starting job instead. 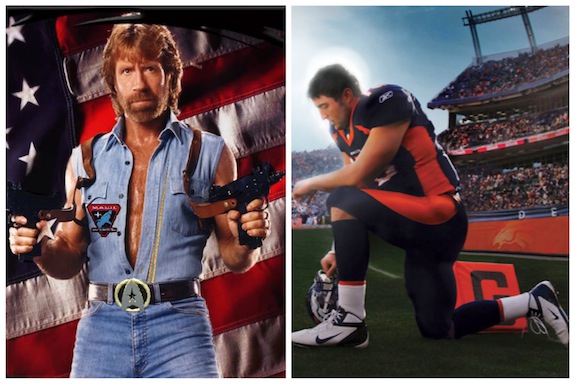 At least the Sanchez story was…well…a story. Theoretically he’s still a starting QB in the NFL, and worst case scenario he’s playing backup in the fall—either way, it’s a football related story. Tebow is unemployed and, whether or not Chuck Norris believes it, there’s a reason for it.

Spoiler alert: He doesn’t believe it.

Tebow is unemployed because he’s not good enough to play the QB position in the league and he refuses to consider playing a different position. If he was good enough, you can be damn sure he’d be on a roster right now.

Although Norris uses much of his 1,000+ word column needlessly defending Tebow disputing that issue—insisting teams are just bowing to public pressure to keep him out of the league. A national conspiracy, that’s what we have here!

The column titled “Why Tim Tebow Is an Ultimate Clutch Player” is not only entirely useless, Norris undermines the entire piece within the first six sentences. He remarks on Tebow’s inexplicable 2011 season with the Broncos, but immediately concedes that we all know 15 games does not a career make.

Nor does it make him an UCP (ultimate clutch player) in the NFL. His acronym, not mine.

Norris briefly glosses over Tebow’s phenomenal career at the University of Florida, probably because anecdotal evidence that he can play his position at a professional level is lacking severely. Not that evidence or statistics or reason are highly regarded by Norris. They aren’t. At all. Those words may not even be in his vocabulary.

Walker Texas Ranger is more of a big picture guy. Tebow’s enthusiasm, leadership abilities, and the fact that he was ranked No. 1 on Forbes list of the most influential athletes in 2013—those are the reasons that Norris believes he could be a “superstar and legend” in the NFL. He noted the sad sack QB of the Green Bay Packers Aaron Rodgers came in a distant No. 8.

Check out all the less influential losers on the list.

Critics be dammed, literally. Both are men of faith and he isn’t content to let coaches or any so-called “experts” guide Tebow’s career, dragging him down with their facts and figures and assessments. Nor will he sit idly by as the media erase his litany of accomplishments—which Norris believes they are desperately trying to do.

The whole piece is a head scratcher, but when Walker Texas Ranger double dog dares Jacksonville Jaguars‘ owner Shad Khan to sign Tebow, his two-pronged approach is truly inspiring. First he goes the direct route, promising tens of thousands of additional fans in the stands, including Norris himself.

Then he goes in a completely different direction, opting to use the words of assassinated civil rights leader Martin Luther King Jr., who Khan considers an inspiration and personal hero, to essentially call him a chicken for not signing Tebow. Talk about being an evil manipulative ginger.

“There comes a time when one must take a position that is neither safe nor politic nor popular, but he must take it because conscience tells him it is right.”

What’s amazing here is that Norris not only compares the plight of Tim Tebow’s unemployment to the fight for civil rights in the United States, he has the balls to use the exact words of Martin Luther King Jr. to gain traction for his shockingly stupid and inexcusably insensitive argument.

Outside those fun facts, I didn’t know much about Chuck Norris until today. Turns out he’s less of a mythical martial arts superhero, and more of a delusional weirdo whose knowledge of football is only dwarfed by his severely limited grasp of basic grammar and composition. Perhaps he’s just suffered too many roundhouse kicks to the dome.

So what have we learned? 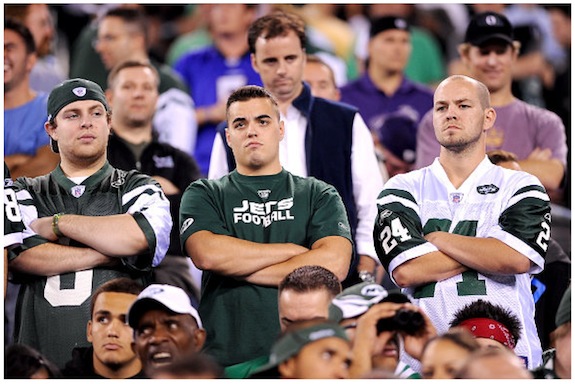 1. It’s super sad to be a Jets fan. Jeez Louise. How do those folks do it? They may not ever win another Super Bowl, but those fans deserve a medal or some sort of trophy for having to suffer through all of this asshattery.

2. Tim Tebow needs to watch the company he keeps. When your most high profile supporters are Walker Texas Ranger and ESPN’s screaming ghoul Skip Bayless, who seems to love Tebow on a more personal masculine level than just football, it reflects poorly on him.

4. Chuck Norris is borderline mentally disabled and tried to use his national platform to promote Tim Tebow, but only managed to embarrass himself and drag Tebow down with him in the process.