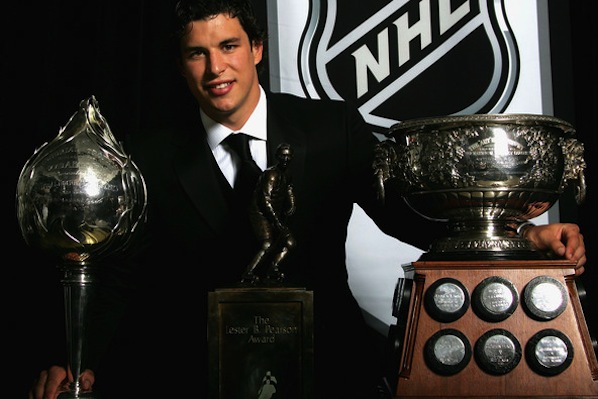 Sorry haters, Sidney Crosby is the odd-on favorite in 2013.
Clearly he’s no stranger to the winning of trophies.

This year the finalists for the Hart Memorial Trophy are the Pittsburgh Penguins‘ Sidney Crosby, the Washington Capitals‘ Alex Ovechkin, and the New York Islanders‘ John Tavares. Obviously it’s no Stanley Cup, but with very few exceptions, nearly every player to ever win the trophy has been inducted into the Hall of Fame.

The NHL’s Hart Memorial Trophy is awarded by polling members of the Professional Hockey Writers’ Association on who they judge to be the player the most valuable to his team. Sure it may seem like an easy task at first glance, but dig a little deeper and it’s not long before you’re down slogging around in the muck.

Essentially it’s the MVP award, but the official terminology calls for “the player adjudged to be the most valuable to his team” during the regular season. If you find the language to be vague and open to interpretation, you’re not alone. Hockey writers take it among themselves to decide the official criteria.

Some stay true the official criteria, judging players not only on their greatness, but focusing primarily on their contribution to their own teams. Others have a broader interpretation of the criteria, which means you never know what you’re going to get—particularly in a season that was substantially shortened by the lockout.

Although, if you’re interested in a perfect explanation for casting one’s vote for the Hart Trophy, you might want to check out Gary Washburn’s piece in The Boston Globe.

He’s a basketball writer who was defending his choice of the New York Knicks Carmelo Anthony as the NBA’s MVP. Washburn’s reasoning for casting the only vote that didn’t go to the Miami Heat‘s LeBron James is complete garbage, for the NBA.

But for the NHL? He laid out an argument and selected an athlete that were both in the true spirit of the Hart Memorial Trophy. Was Anthony the best player in the NBA this season? No.

Was he more valuable to his team than James was to the Heat? Well, he certainly made quite a convincing case. Unfortunately it was for the wrong league and the wrong award.

That might have seemed like a lot of boring semantics, but there’s a method behind this madness. That whole spiel above was required. It was necessary due to the uncertainty resulting from a shortened season, and the liberal interpretations of what qualifies a player for the Hart Trophy, could spell a major upset in 2013.

As for the finalists: 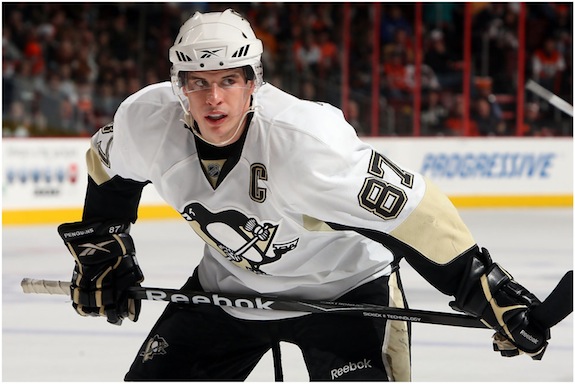 The Paul Newman of the group.

According to those magical odds makers, Penguins superstar Sidney Crosby is the decisive favorite to win the Hart Trophy this season. They’re giving Sid the Kid a probability of 67 percent to nab the award, which means they expect him to run away with the thing. And the proverbial “they” have a pretty good case here.


Crosby played no fewer than 11 less games than every other player in the NHL’s Top 25 leading scorers for 2013. He finished with 56 points on the season, four less than the leading scorer, and tied with rival Alex Ovechkin for the No 4 spot. Had he not missed 12 games due to injury, this wouldn’t even be a contest. But since he did…

Where Crosby distinguished himself was with a +/- of +26, which means nearly every time he’s on the ice, something good is happening for his Pens. His goal total halved that of Ovechkin’s, as did his time in the penalty box. The real issue with Crosby is that the Penguins won without him, which is a problem if you really consider the official terminology.

Yes, Sidney Crosby was amazing this season. But the team didn’t fall apart when he wasn’t suited up, having gone 8-4 in his absence. There’s a chance that the hockey writers will penalize him for being fortunate enough to have such talent around him. 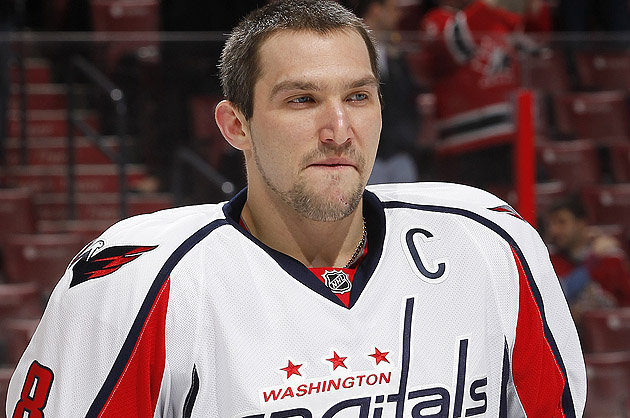 If there’s an anti-Crosby contingent as prevalent among the sports media as there is at the Verizon Center in DC, expect Capitals captain Alex Ovechkin to have a pretty strong showing among voters. Odds makers give him a probability of just under 28 percent to take home the trophy. Which probably has a far more favorable translation in the Russian market.

Those chances might not sound too promising to someone receiving a cancer diagnosis—28 percent? Yeesh— but if you peruse the interwebs to gauge support for Ovi among hockey writers, you may get the sense that this Russian rifle isn’t exactly an underdog. Certainly not by traditional standards. He’s one of the biggest superstars on earth in his sport, so calling him and underdog doesn’t quite fit.

Throughout his entire NHL career, which dates back to the 2005-06 season, Ovechkin has never been an underdog. The Capitals have been routinely among the most competitive teams in the league during the regular season since then, thanks in no small part to the (average) 100+ points Ovi produced in the first six years of his career.

His +/- ranking hasn’t been the best and he has a tendency to rack up penalty minutes and even suspensions. But there is no question that the Capitals have lived and died by the stick of Alexander Ovechkin since his rookie season.

He’s only 22, so let’s just say Tavares is the Justin Bieber of the finalists.

First of all Isles fans, nobody freak out. John Tavares and Justin Bieber have nothing in common aside from their home country and approximate age range. He’s too young to associate with a distinguished movie star persona, so making a joke about The Biebs just felt right. It felt right in a way that was certainly not intended to disparage the Islanders stud center.

Despite odds makers putting the probability of him winning at just under 17 percent, Tavares will get the respect he’s due here. A relative newbie to the NHL, particularly considering he’s up against competition like Sidney Crosby and Alex Ovechkin, but Tavares has been one of the few bright spot for Islanders fans in recent years.

The Isles were a team team that were an abject disaster right until the time that he came along during his rookie season in 2009-10. Seriously. Prior to the 2013 season, the Isles failed to make the playoffs in each of the five previous seasons. Tavares’ production on the ice and influence in the locker room has taken this team from a running joke to a legit competitor in just four seasons.

But it was in 2013 that he really broke through. Tavares led the Islanders in overall points, but his 28 goals were 13 more than his closest competitor. He had the highest shooting percentage on the team by far. The most shots. Basically all the game winning goals.

Tavares’ nine power play goals led the team—Matt Moulson had eight, the rest of the team barely combined for eight. He didn’t miss a single game, took relatively few penalties, and even at -2, his +/- ranking was the best of the players that actually saw significant ice time. 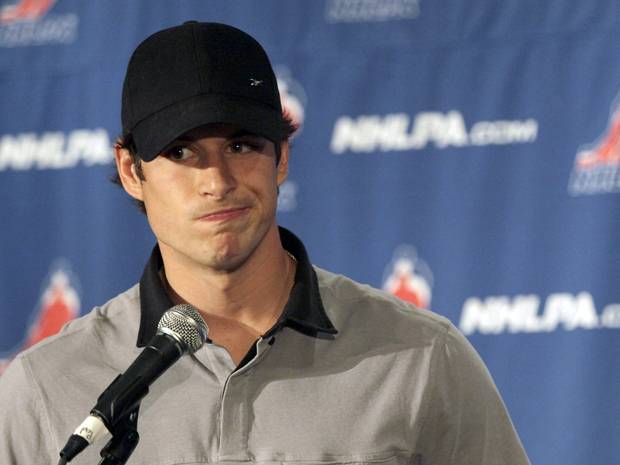 Even Sidney Crosby may cast his vote for John Tavares.

So where does that leave us?

Two roads diverged in a yellow wood. In this case the roads are named Sidney Crosby and Alex Ovechkin. But they’re both yellow wood and look pretty much the same—where’s the fun in that?

We’ve been down Crosby Lane and Ovechkin Bouldevard countless times before. They’re both great players on great teams with a lot of great talent around them. The Penguins sailed into the 2013 NHL Playoffs as a No. 1 seed and the Capitals certainly didn’t struggle down the stretch for their No. 3 seed.

The odds makers will say what they say because of what the hockey writers writing what they write.

But this has been a strange year for hockey. The lockout was a disaster, but it managed to come together just in time to save the season. A very interesting season.

It might be just the year to take the road that is really not taken. The road not taken is John Tavares.

The smart money might not be on this kid, but my money is.