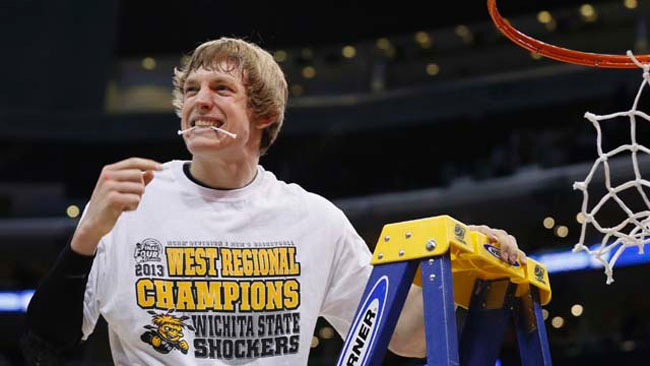 The Wichita State Shockers have certainly lived up to their school nickname several times during the 2013 NCAA Tournament, but they saved their best performance for Saturday night’s West Regional final and provided one of the biggest shockers in NCAA tournament history.

The ninth-seeded Shockers sent shockwaves throughout the country as they knocked off two-seed Ohio State by a score of 70-66 to win the West region and advance to the Final Four. Although we’ve seen other mid-majors reach the Final Four in recent years, to say Wichita State would be in Atlanta come April would have been a bold prediction indeed.

“It’s crazy. I still can’t believe we’re here,” said Wichita State guard Cleanthony Early, according to ESPN.com. “You try to expect it, but you expect a lot of things that don’t happen. This really happened.”

Of course, Wichita State’s cinderella run hasn’t been easy and it had to withstand a monumental second-half charge from one of the nation’s best finishers to continue its historic tourney journey.

After assembling a 20-point lead midway through the second half, Wichita State began missing shots and Ohio State began to impose its will, cutting the lead to just three after a 21-6 run with a few minutes left. But that’s when Wichita State proved it belonged with the big boys, as Tekele Cotton hit a big-time three-pointer to put the Shockers back up six with two minutes to go, which consequently put the Buckeyes back in panic mode.

Wichita State may have shocked the world again, but the only people who weren’t so surprised were the Shockers themsevles.

“We’ve got a team full of fighters,” said forward Carl Hall. “I brought them all together near the end and said, `No matter what happens, I love y’all.’ We had to fight so hard. We’ve got each other’s backs, and it’s hard to beat a team that’s got five guys who work together like us.”

Obviously, the road will only get tougher from here on out, as the Shockers await to play either Duke or Louisville in the national semifinal, but as we’ve seen so far, they will be prepared for any challenge that comes their way.

“We’re all new to this, but I think we’re ready for this,” Early said. “We’re going to prepare ourselves, and this game was pretty good preparation. We started at the bottom, and we’ve been working our way up.”

Needless to say, much of America will be rooting for its favorite cinderella in the Final Four, which tips off next week.