Have You Seen Saturday’s Schedule?

No, really. Have you seen Saturday’s college basketball schedule?

Okay, there’re more games on the slate than just these five*, but seriously, take a look at this quality quintet.

Now, granted, before we even get there we’ve got 10 ranked sides looking to avoid an upset on Wednesday night, while No. 19 Oregon will hope to do the same against a tough Colorado side on Thursday (9:00 PM ET). Then there’s the small matter of No. 22 Wisconsin at No. 10 Michigan State (Thur., 9:00 PM ET).

Let’s face it; the way this season has played out so far, just like Indiana on Tuesday night, somebody’s going down before we even get to the weekend.

But when we get to the weekend, oh boy. 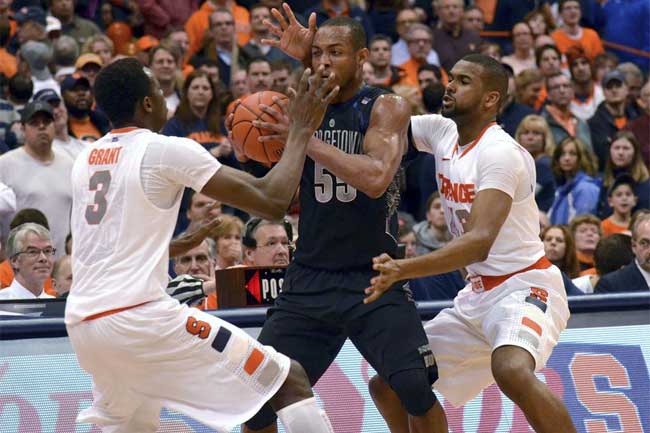 Georgetown and Syracuse will clash for the final time in the Big East, with both looking to make a statement.

With No. 17 Syracuse (22-7, 10-6 Big East) heading to the ACC later this year, this will be the last time the Orange faces the Hoyas for the foreseeable future. Of course, No. 5 Georgetown (23-4, 13-3 Big East) will be putting sentiment to one side as it looks to secure the regular season conference title. Syracuse meanwhile will be looking to avenge a 57-46 loss to the Hoyas back on Feb. 23, a loss that snapped a 38-game home winning streak and sent the Orange into free fall.

A win for No. 11 Florida (23-5, 13-3 SEC) over Vanderbilt on Wednesday will give the Gators the SEC regular season title outright. With two losses from four games, that win is less than guaranteed. Of course, a win becomes mute if Kentucky (20-9, 11-5 SEC) loses at Georgia on Thursday. The real appeal of this one though comes from the Wildcats’ bubble status. Are we going to see an NCAA tournament without Kentucky? A loss in this one could prove lethal.

Here’s the end of another Big East rivalry. No. 24 Notre Dame (23-7, 11-6 Big East) will face No. 8 Louisville (24-5, 13-4 Big East) for the final time (tournaments pending) on Saturday as the Cardinals prepare for life in the ACC next season. Louisville has shrugged off a three-game skid (the curse of the No. 1 team) with nine wins in 10. That one loss was a five overtime thriller against the Irish. Notre Dame meanwhile could be fighting for its NCAA lives, depending how the selection committee views its somewhat erratic season.

The say you should always leave the best for last. Well how about this one? No. 3 Duke (25-4, 12-4 ACC) travels along Tobacco Road to take on North Carolina (21-8, 11-5 ACC) in the next installment of college basketball’s best rivalry. It’s unlikely Miami will lose its final two remaining games, so the Blue Devils will have to make do with second place. Of course, a win over their arch rivals won’t go amiss. Meanwhile, the Tar Heels could really use a marquee win heading into the ACC tournament, and to convince the committee they should be playing in the NCAA tourney.

*The rest of Saturday’s AP Top 25 schedule reads like this:

If Saturday’s slate doesn’t whet your appetite enough, consider that Sunday has a beast of a game on its schedule as No. 2 Indiana (25-5, 13-4 Big Ten) travels to No. 7 Michigan (24-5, 11-5 Big Ten). Indiana already has a share of the Big Ten regular season title, but they’ll need to get the ‘W’ in this one if they’re to win it outright. In theory, a loss could lead to four teams sharing the title.

If you need anything more to get you excited, consider this: tournament play is here! Both the Big South and Horizon League got play underway in their respective tourneys on Tuesday night. Another five conferences will do likewise tonight, including the West Coast Conference. Gonzaga however won’t take to the court until Saturday’s semifinal.

The Big East Tournament – the first of the power conference tournaments – gets underway on Tuesday (Mar. 12). The Big 12, Pac-12 and SEC tournaments follow suit on Wednesday (Mar. 13) while the ACC and Big Ten tourneys tip-off on Thursday (Mar. 14).

ESPN premiered the next in its SEC Storied documentary series this past weekend. Miracle 3 focused on the 2008 SEC tournament, in which a tornado struck the Georgia Dome during tourney play, and Georgia’s subsequent upset victory. If you need any more incentive to see how exciting and wild these tournaments can be, hunt down this 60-minute documentary. It’s well worth the watch.