The AFC South remains a one-team show as the Houston Texans remained unbeaten after trampling the Tennessee Titans. The Texans took it to the Titans and blew them out 38-14 to move to 4-0 on the season and remain just one of three undefeated teams in the entire NFL. The lopsided win gave the Texans 70 net points, with the next closest team in the league at 48.

Matt Schaub continued to impress at quarterback hitting on 20 of 28 passes. He now owns a 67% passing completion rate and a 105.3 quarterback rating. His touchdown to interception ratio is 7 to 1. Many are starting to call Schaub one of the top 5 QBs in the league.

Arian Foster did not have the running game many had thought he would against the Titans. He was actually outgained on the day by Titans’ back Chris Johnson. Foster had 86 yards on 24 carries, while Johnson gained 141 on 25 carries. Thus far on the season, the Texans are only averaging a mediocre 3.7 yards per rush as a team.

The play of J.J. Watt on the Texans defense has been extraordinary. After four games played, Watt has 7.5 sacks. The single season record for sacks is 22.5 held by Michael Strahan and he had 10.5 sacks after his four games. However, Jared Allen who came within a half a sack of tying Strahan’s record in 2011 only had 6.5 sacks after four games last season.

The Texans schedule is full of quarterbacks who are sack prone. Mark Sanchez, Ryan Fitzpatrick, Christian Ponder and Aaron Rogers are just a few who Watt will face and get a good opportunity to add to his sack numbers. This season should be a season that Watt has a legitimate chance to pass Strahan.

Tennessee is now 1-3 after their loss to the Texans. The Titans lost quarterback Jake Locker when he had to leave the game after injuring his shoulder following a big hit by Glover Quinn the Houston safety. The injury is the second one Locker has had to his left shoulder after four games this season. The young quarterback might have durability issues going forward. He has started four games this season and has had to leave two of them. 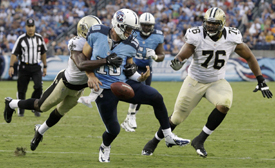 Those numbers do not help an offense become consistent when the leader is constantly changing.

Jacksonville hosted the Cincinnati Bengals last weekend and even though they produced just 212 total yards of offense, it was much more than two weeks ago when they had only 117 against Houston. Jacksonville lost to Cincinnati as running back Maurice Jones-Drew could only manage to rush for 38 yards.

Laurent Robinson for the Jaguars suffered a concussion in the game against Cincinnati. It was his second concussion in the last two weeks. At this point in the week, Robinson’s status is still unknown, but it looks like he might sit out against Chicago this weekend. Back to back games, with a concussion is dangerous in itself, let along throwing him back in too soon. Houston will start week five with a 4-0 record, while Indianapolis, which had a bye week last week, is 1-2 and both Jacksonville and Tennessee are 1-3. The AFC South is shaping up to be a division that will send just one team to the postseason, Houston, while the other three battle for second.