Early Look at Packers vs Patriots

Two of the NFL’s best quarterbacks of their generation meet at Gillette Stadium when the Green Bay Packers and Aaron Rodgers visit the New England Patriots and Tom Brady on Sunday Night Football in Week 9 of the NFL regular season.

New England is 11-0 straight up and 9-2 against the spread in its last 11 home games, winning by an average margin of 14.8 points per game.

Green Bay is 0-5 SU and 1-4 ATS in its last 5 on the road. That trend in itself highly favors the Patriots, but there is much more to consider before making a wager on this high profile matchup.

The opening line had New England (-6.6) favored with the over/under point total at 57.5. Early betting has pushed the line down to New England (-5.5).

Green Bay played one of its best games last week although the Packers were 29-27 losers to the Los Angeles Rams. Green Bay jumped out to a 10-0 lead, and then was outscored 23-3 to fall behind 23-13 before rallying to take the lead at the halfway point of the fourth quarter 27-26.

The Packers gave up a field goal at the two-minute warning, giving Rodgers plenty of time to lead his team down field for a winning field goal, but Rodgers never saw the ball as the Packers fumbled on the ensuing kickoff.

Green Bay was outgained by just 57 yards by the Rams and covered as 7.5-point road dogs. 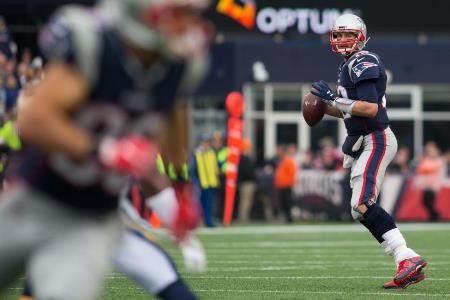 New England is 5-0 SU and 4-1 ATS in it last five played after beating Buffalo on the road 25-6 Monday night. New England led at one time 9-6 then rattled off the game’s final 16 points to cruise to the victory.

The Patriots covered as 13-point road chalk helped by Devin McCourty’s 84-yard pick-six with just over five minutes remaining in the game. The cover was in doubt as the Patriots led 19-6 halfway through the fourth before McCourty’s interception.

The Patriots gained 387 yards on offense and did not turn the ball over.