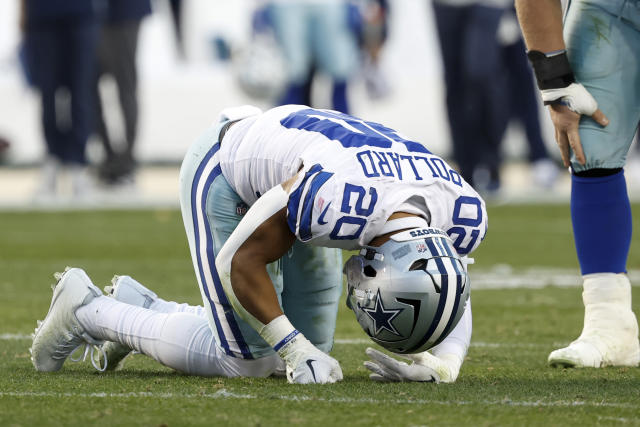 The Dallas Cowboys fell to a disappointing divisional-round playoff loss to the San Francisco 49ers.

The crushing defeat featured Pro Bowl running back Tony Pollard suffering a fractured left fibula that will require surgery. The injury occurred with 1:24 left in the second quarter after Pollard secured an eight-year catch that saw his leg rolled upon as he was tackled.

He needed help to leave the field and was carted to the locker room to receive an x-ray, where the injury was confirmed. His absence from the game left a significant offensive void that put the Cowboys in a greater disadvantage offensively.

Read: “We Are Not Done Yet” – Bengals Cruise To Chiefs Matchup

“That hurt,” Cowboys quarterback Dak Prescott said via ESPN. “Just a guy that brings so much to our offense, brings so much to our team. His energy. His energy on the sideline, in the huddle, the way he gets guys going. He’s a special teammate, special player and obviously that one hurt. It hurt us. Wasn’t able to create as many explosive plays as we planned, and I’m sure he would’ve been a big part of some of those had he not gotten hurt.”

Pollard has served as the Cowboys’ spark plug as part of the team’s running back duo alongside Ezekiel Elliott. He put together a career-best campaign in 2022, recording 1,007 rushing yards and 12 total touchdowns.

Pollard will head into a crucial offseason as he’s set to become a free agent, where he will receive plenty of interest from around the league aside from the Cowboys.