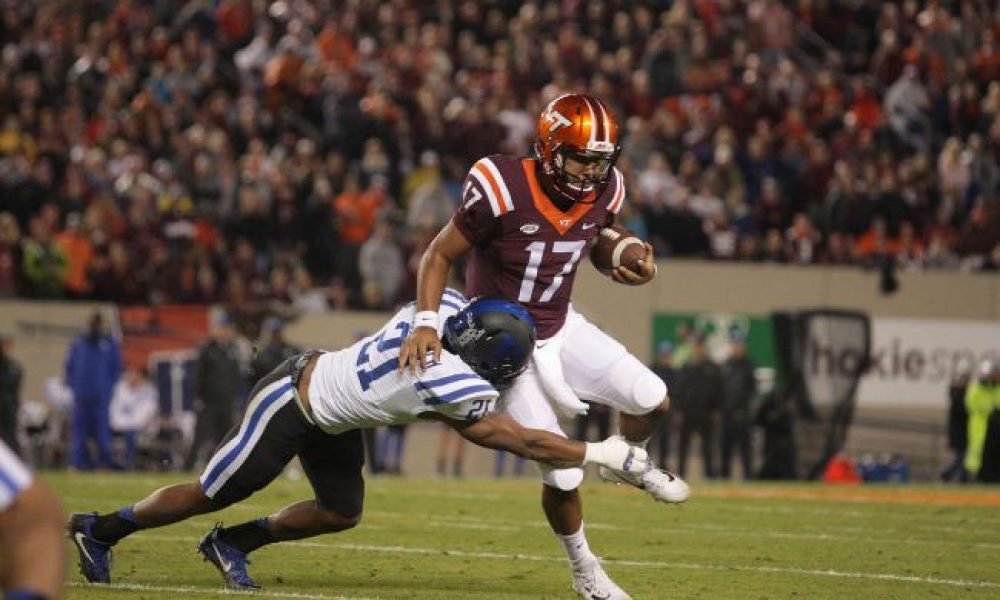 Saturday night an ACC showdown features two teams ranked in the top 15 when the No. 13 ranked Virginia Tech Hokies visit the No. 6 ranked Miami Hurricanes. The current line has Miami favored by 1 point with the over/under point total on 46.5.

Virginia Tech arrives in Miami off a 24-3 win over Duke while Miami is coming off a 24-19 come from behind win over North Carolina and remains the only ACC team still undefeated.

With 12 consecutive wins dating back to last season, Miami has the longest current FBS winning streak, but is ranked just No. 10 in the first rankings released for the College Football Playoff, and have not dominated recent opponents that have not been top ranked teams by any means.

The Hurricanes have beaten Florida State, Syracuse, Georgia Tech and North Carolina by a total of 18 points.

On the other hand, Virginia Tech has won three straight games outscoring its three opponents 106-20 and has held opponents to 10 points or fewer in five games.

The defense is the strength of Virginia Tech ranking No. 2 in points allowed at 11.5 per game and No. 3 in third-down conversions at 24%.

Offensively, quarterback Josh Jackson has thrown for 2,032 yards and 17 touchdowns for the Hokies, while the team has rushed for 180 yards or more in five games.

Malik Rosier, the Miami starting quarterback passed for 356 yards and three touchdowns in last week’s win over North Carolina. The ‘Canes beat NC by 5 points, while Virginia Tech defeated them by 52 points the week before.

Miami is 5-0 in the ACC this season for the first time in its history as a member of the conference.

Prediction: Miami is undefeated but is barely winnings games. Its streak of 12 straight stops here. Lean toward the Hokies two win.