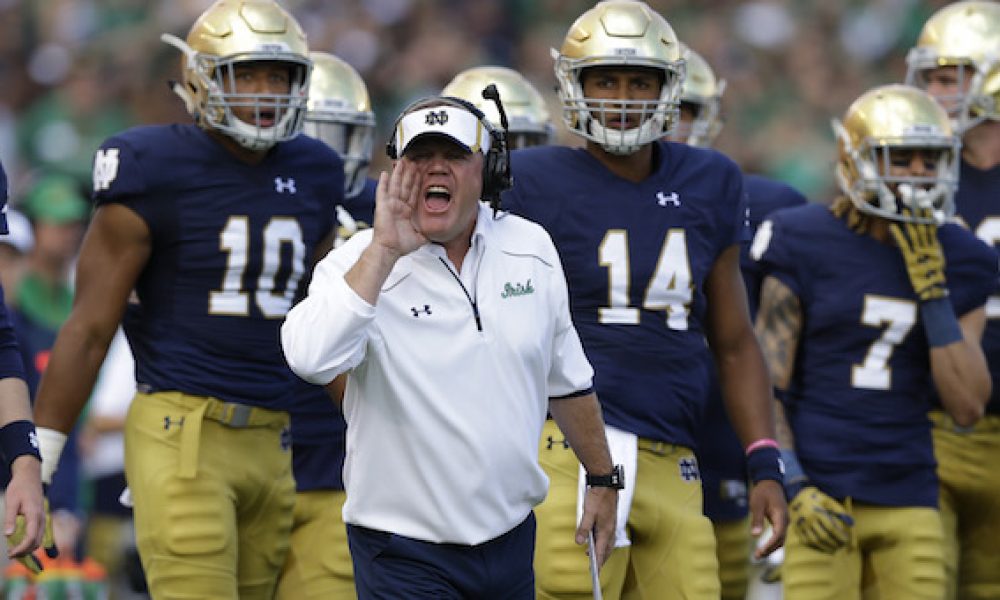 Notre Dame coach Brian Kelly was asked if he’d ever leave the program of his own volition on Saturday after a TV segment of him started people talking about a possible move. Kelly did not mince words and swiftly rejected any notion that he’d leave the Fighting Irish for another job.

Brian Kelly asked if he'd ever leave Notre Dame, aside from retirement: “No. I mean, look, I think Mike Tomlin had the best line, right? Unless that fairy godmother comes by with that $250M check, my wife would want to take a look at it first. I'd have to run it by her.”

“No,” Kelly said. “I mean, look, I think Mike Tomlin had the best line, right? Unless the fairy godmother comes by with that $250 million check, my wife would want to take a look at that first. I’d have to run it by her.”

Kelly is referring to the Steelers coach’s viral response when asked about possibly leaving for the USC job. Like Kelly, Tomlin essentially said there was no chance. The storyline was set in motion after a Saturday segment on College GameDay when several analysts named Kelly as a prime target for USC. Kelly later called the rumor a “smokescreen.”

Kirk Herbstreit and Desmond Howard believe USC should go after Brian Kelly to be the next USC head coach. pic.twitter.com/ePqMUQ96iX

Brian Kelly has been coaching at Notre Dame since 2010 and has compiled a 112-40 record while there. USC will likely have to find their man somewhere else.