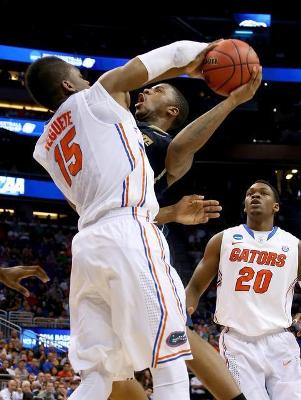 The Florida Gators are looking to extend their school record winning streak to 30 games tonight when they face the Dayton Flyers in the Elite Eight. But it is a three game losing streak that has their attention and that is one they would love to snap. That is the three game skid in Elite Eight games they have these past three seasons.

Patric Young, Scottie Wilbekin, Will Yeguete and Casey Prather are playing in their fourth Elite Eight game tonight. They come in at 0-3. To leave 0-4 would be hard to swallow.

The Elite Eight has to be the worst round to lose in the entire NCAA Tournament. Why? Think about it. The NCAA Tournament is very unique in that just getting to the championship round is celebrated like winning a championship. After teams win an Elite Eight game, confetti rains down on them and they get those championship hats and tee-shirts. They break out ladders and everyone cuts down the nets. That is the same thing that happens when you win the national championship. It doesn’t happen in getting to the Sweet Sixteen.

So to win the tournament,a team must win six games. You do that and you cut nets down after the fourth win and the sixth win. Florida has won three games in the last four NCAA Tournaments. That’s 12 wins and no celebrations. If you lose the national title game, you would think that would sting the worst. But at least you got to cut nets down after the Elite Eight. You lose in this round, you watch your opponents cut them down.

Florida had double digit leads in the first two of those three straight losses in the second half only to watch them slip away. If you think that this time they are playing a virtual nobody in the Dayton Flyers so it should be no problem, in the first of these games they lost to the Butler Bulldogs. This was before they were a Final Four team that nearly won it all twice in a row. This was when they were not supposed to beat a big time SEC school.

The Gators have won 29 games in a row. They have beaten the Kentucky Wildcats three times. Twice they cut nets down after the game. They beat the Tennessee Volunteers three times. They beat the Florida State Seminoles, Memphis Tigers, Kansas Jayhawks, Georgia Bulldogs and the Auburn Tigers and Alabama Crimson Tide twice each. Lose this game and none of that matters. It will just be another ‘close but no cigar.”

Sportsbook.com has the odds on the game: