Saints Alvin Kamara and Jared Cook Ruled Out Versus Bears

The New Orleans Saints have won four straight but will be tested Sunday on the road at Soldier Field against the Chicago Bears. The Saints announced that running back Alvin Kamara as well as tight end Jared Cook would not play due to injuries.

The loss of Kamara and Cook will hurt the passing game for the Saints as Kamara is second and Cook third on New Orleans behind just wide receiver Michael Thomas as passing targets and each has two receiving touchdowns.

However, both sat out during practice this week following injuries sustained at Jacksonville last Sunday. Kamara will be replaced by Latavius Murray, who was the starting running back for both the Raiders and Vikings prior to joining the Saints.

Josh Hill will replace Cook at tight end but expect others to rotate in and out with Hill. 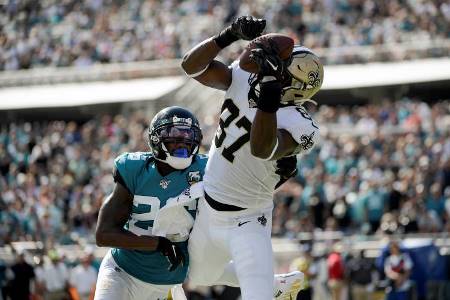 Kamara is the leader for the Saints in yards from scrimmage with 649, but hurt his knee versus the Jaguars said head coach Sean Payton. Kamara played through the injury but the knee was too sore for the running back to practice all week and the team opted to hold him out of Sunday’s game.

Murray was signed by the Saints during free agency to complement Kamara as well as be available in situations such as this. The 29-year old Murray has rushed for 3,836 yards, while accumulating 950 yards receiving and has scored 35 touchdowns. In 2015, Murray played in the Pro Bowl while with Oakland after rushing for 1,066 yards and over the past two seasons has a total of 1,420 yards splitting time in the backfield of the Vikings.